The Ganesha (also called Ganapati) festival in India begins tomorrow. In Maharashtra and specially in Mumbai its a 10 day extravaganza that sees people on the streets visiting several ‘Ganapati mandals’ and for having a ‘darshan’ of the lord. Some of them bring the ‘Lord’ home with a lot of funfare and prayers. Its fun for the kids, holiday for the parents and serious business for grandparents. Whatever way you perceive the festival as, it is ‘THE’ time to be in Mumbai to watch this festival in its grandeur.

It is also one of my favorite festivals. I find Ganesha very artistic- probably the only god across the world who can be depicted in millions of artistic ways. Thank god Shiva beheaded an elephant to fix its head to his son’s body- any other animal would have taken away the artistic depiction! (WWF wasn’t in existence then). My elevator pitch of Ganesha is – the ‘first medical transplant in history’. During my entrepreneurial days I have gifted Ganesha to several foreigners as India’s Good luck charm and then narrated his story. They have relished the gift and always displayed ‘him’ on their desks. 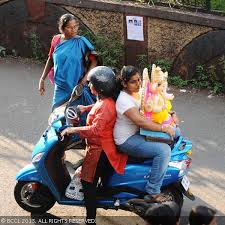 Moreover, music and this fest go hand in glove. Walking down the streets of Mumbai every Ganesha group has its own brand of music- from Bollywood to regional to bhajans and even EDM! Celebrities right from Raj Kapoor to Salman Khan  and Nana Patekar have had the idol in their house. On the immersion day of the idol the music peaks. In childhood, I would dance on the streets with my friends to this music during immersions till the morning sun calmed us down.

Recently, this festival has been criticized for being commercialized. Further research showed me that in a lot of cases it defies the whole purpose for what this festival and the god stands for.  It originated when people wanted to celebrate the fertile soil brought by the fresh monsoon and would take the fertile soil home and sculpt Ganesha idols. The idols would be immersed in to the river/sea as the clay would crack after a day or two. Another story says that while immersing the idols in the sea a lot of offerings to the deity like turmeric would be mixed with the water thereby purifying it. Later, this personal expression became a social revolution -first by King Shivaji and later during the Indian independence struggle days by Bal Gangadhar Tilak.

Nowadays, very few of the social ‘Ganesha mandals’ retain the originality. For most of them it has become an expression of their social stature, politics and other man made reasons. Besides, the idols are made of Plaster of Paris (PoP) for cheaper and lighter idols. These don’t disintegrate in water- thereby defying the whole purpose that this fest was once started for.

However, times have changed and hopefully would change even further.  Some groups have started recognizing the environmental damage caused by the PoP idols and have started taking appropriate action. The spirit of Mumbai city gets an uplift in these days. Though there are the traffic jams and loud music, people still look happy. As if Ganesha himself has set foot one earth in his true spirit of Vignaharta- remover of all obstacles!!! Ganapati Bappa Moraiya (Salute to Lord Ganapati)