Traveling to the jungles is always an enchanting experience. You never know what surprises it has in store for you. The long weekend was the perfect time to explore the forest down south India with a dear friend Pankaj Pipal- an architect who is excellent at exotic structures and is currently building a tree house in the forests of Tamil Nadu in India. Since he was arriving a day later on the 16th Aug and I had a long weekend from 15th, I decided to go ahead and spend a day at the elephant training center at Kodanad in Kerala.

While traveling to Kerala is always exciting for me, the hot and humid weather is a deterrent. However, thanks to the monsoon, it was pleasant with intermittent showers. Hiring a cab from a small but significant town- Chalakudy- I headed towards Kodanad. The drive was smooth and my conversation with the driver in pathetic Malayalam mixed with Tamil was funny. At one point he shocked me saying the drive would cost me Rupees Nine Thousand instead of Nine hundred! It being Independence day, the streets were lined with Indian flag colours and patriotic Indians. A procession of school kids dressed in costumes of freedom fighters took the cake.

My experience at the elephant training center was dulled down due to the illness of its main elephant who one could ride on. But the beauty of my favourite animal next to the banks of the Periyar river made my trip there worth it; though I would have liked them better unchained and in the wild.

The next stop was Athirapalli waterfalls immortalised by Mani Ratnam in his movies Raavan and Roja. The gigantic falls appears like a miniature version of the Niagara though the water is very muddy. Monkeys mingling comfortably with the visitors made it a very appealing sight.

So next day I was all charged up and woke up early to take a bus to Coimbatore. It was a funny sight – I almost missed the bus and the whole bus station was shouting and whistling at the bus driver to stop it while I was running behind it with a backpack on my shoulder. I finally managed to board it and after a while occupied the seat right in the front next to the conductor. A cup of filter coffee and several dosas later I reached the Coimbatore airport where I met Pankaj who had just flown in from Mumbai.

The drive from the airport to the Navmalai forest (near Polachi- Tamil Nadu) was surprisingly laced with well maintained roads. Though initially packed with parked tourist cars, the drive suddenly became surreal when the ‘reserved zone’ of the forest started and the human population gave way to the greener species. The lake surrounded by the hills and sparsely interspersed with trees was a sight to behold. 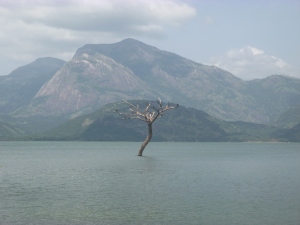 Soon we were transported to a hidden clearing in the forest where the under construction tree house was dwarfed by the surrounding palm trees.

After examining the status of the construction, we ventured in the forest to check out the stream and waterfalls, led by the site workers. An amazingly surreal sight awaited us- the water from the stream flowed in to a lake and then flowed down again transforming itself in to a small waterfalls int he process and cascading beautifully like a serpent on a slippery surface. The interwoven trees and the landscape was straight out of the movie -Avataar. The ecosystem of the nature at its best unfolded in front of us. Every tree was a part of the symphony while the stream played music and silence was a spectator. We were awestruck by the magnificent ambience and it didn’t take us long to strip to our bare necessities and jump in to the water like kindergarten kids.

After almost two hours of playing with the water and the rocks and several pictures later, we finally drove back to the concrete jungle reluctantly. Even in my wildest dreams I hadn’t seen such wilderness and I am still under the effect of mother nature !